Of Japanese origin, imitation crab has found its way across borders and turned into a national sensation here in the United States.

You’ll find them stuffed into sushi, used in california rolls, fried into delicious crab sticks, and scattered across many different salad preparations, for example, the popular “seafood macaroni salad”.

In some places, you’ll find people tearing up the production wraps and consuming the contents as they are!

Imitation crabs aren’t raw when they’re sold in grocery stores or supermarkets, they’re precooked to doneness along the production chain and are therefore ready to be consumed as they are without risk of any side effects.

It’s a common practice we’ve imbibed in our subconscious to grab “meat” from their packaging and cook, say, over hot vexing oil, before we can even think about eat them — and that’s exactly the knowledge we’ve transferred over to our culinary episodes with imitation crabs.

But cooking imitation crabs really isn’t a necessity, unlike raw meat from poultry or lamb, and it should always remain an option unless it’s a personal thing.

I personally like to incorporate imitation crabs into recipes to get richer flavors and develop the nutrient profile of the meal I’m consuming. Thus I cook. And that’s everything to know about my reason.

But I know of a friend that loves to snack up on imitation crabs directly from their packaging, not for any reasons but because the packaging boldly says “Ready To Eat” and also because she loves the feeling of biting into ice cold crab.

How you’d verify this claim is by reading the food packaging. It’s mostly written at the top clearly and in bold, that the contents of the packaging are “Fully Cooked & Ready to Eat”.

During manufacture, the imitation crab is fully cooked and mechanically vacuum packed to protect it from contamination, in addition to boosting aesthetics.

Thereafter, the sealed meat is pasteurised in a steam cooker to prevent bacteria growth and boost shell life.

So consuming the meat directly from the refrigerator in its cold or thawed out state is perfectly fine, and the only time you should be concerned about eating imitation crab meat raw is when the meat has sat out for more than 4 hours outside the refrigerator (in a hot atmosphere).

The crab will turn soft, mush and most likely breed pathogenic bacteria that can make you sick when you consume the food.

What other ways can you eat imitation crab

Aside from eating imitation crab “raw”, there are other interesting ways to enjoy them.

Here are a few of them.

Imitation crab can be added to fillings for buns, bread etc to make it even more bulkier and hearty.

The easiest filling you can make is with ingredients you already have at home, mayonnaise, onion seasoning of choice and lemon juice.

Mix all ingredients in a bowl and refrigerate for an hour to allow the flavors to come together. Stuff your buns when the salad and serve as you like.

One exciting way to use imitation crab is in soup. There exist a wide variety of soups made with imitation crabs to choose from, each suited for specific weather, time, place and even mood.

Among the simplest imitation crab soup recipe to make is the “Easy Crab Soup Recipe”.

This recipes calls to melt butter in a sauce on, add imitation crab alongside milk, and cream, and bring to a boil. Allow to simmer for 25 minutes then remove from heat and season and serve as you like.

Dip your imitation crab meat into the mix and remove using a fork. Let most of the mix drip from the surface of the meat before adding to a pan containing 2 to 3 inches of oil at 375 °F.

Allow to turn brown and remove and drain oil. Serve with your favorite sauce.

One creative way that people eat imitation crab is crab rolls. Instead of tossing the regular crab meat into melted butter and seasoning and building as per recipe instructions, you use imitation crabs instead. They work great as substitues!

Absolutely not. Imitation crab isn’t real crab, in fact, it’s far from it, despite having elements that reminds us of the regular crab meat in taste and texture.

Imitation crab is a fortification consisting of the base ingredient surimi — which is basically minced pollock (fish), and other elements such cryoprotective compounds to help maintain the integrity of the meat after freezing and also improve its shell life, flavorings which include amino and organic acids, proteins, esters and ketones to help mimic the taste of crab meat, seasonings to add depth to the overall flavor of the meat, starch and egg for structure and texture and oil for improving the overall appearance of the meat.

All these ingredients combine together to give the imitation crab texture, taste and consistency like that of a crab meat.

Whilst they do a pretty decent job at that, the nutrition differs greatly with that of the real deal.

And it also has more vitamins and nutrients partly because some of them are lost during leaching of minced fish in the making of surimi.

So overall, crab meat is naturally superior to the imitation crab meat in terms of nutrition and if you intend reaping any of the benefits you should always opt for it instead.

What should I do with leftover imitation crab?

For leftover imitation crabs, package them as soon as possible and store in the refrigerator in an airtight wrap for no more than 3 days. Freeze for upto 6 months.

Imitation crab meat isn’t raw to begin with. It is fully cooked during manufacturing and subsequently sterilized to prevent bacterial growth. As such, it can be eaten as it is without fear of any health risk.

The only time to be concerned of eating imitation crab meat is when it has sit out for too long outside the refrigerator.

It may have a scary population of bacteria already growing on it which can cause food poisoning when ingested. 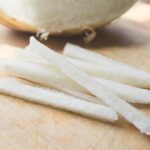 Can You Eat Jicama Raw? Can You Eat Sausage Raw?