You’re not always going to have the luxury of placing your refrigerator anywhere you want it around the house (which also includes the kitchen).

When you have tight spaces to work with and the best available solution is right next to the oven, what should you do?

Should you go ahead and make the oven a contrasting neighbor of the refrigerator, or should you not, because you fear some serious consequences might crop up along the way?

Here’s what you should do.

When should you place a refrigerator right next to an oven?

As clearly stated in the paragraph above, you should only place a refrigerator right next to an oven (especially a gas oven having stovetops) when the owner’s manual of BOTH appliance agree to such practice. That could be what saves you from forking out money to buy a new refrigerator months after you purchased the first one.

If you’re finding it hard to find the owner’s manual of your refrigerator and oven, look it up online using the brand name and model number. The internet is never short of good Samaritans like me.

I have the owner’s manual for both the fridge and the oven, and there’s nothing like a warning issued out.

In that case, it should be safe to place the refrigerator right next to the oven, and here’s why: we’re in the 21st century and nearly every single manufacturer of kitchen appliances should know that provision are made in kitchen layout designs for slotting fridges and ovens into provided spaces, sometimes as contrasting neighbors to each other.

Thus, it should only be the case that someone was aware but still advanced to print out manuals without issuing out warnings in them.

And this can only translate to one meaning: that the safe haven for the fridge is right next the oven!
Or maybe not, but at least a decent location.

Still, you shouldn’t take my blunt assumption for it. In cases like this, it’s best to avoid placing the fridge right next to the oven especially when the fridge is an old one, the oven is a gas oven, and provisions aren’t going to made to insulate the two materials from each other.

Okay, so we have two manuals that say yes, what’s next?

You don’t just place a fridge right next to oven and call it a day, you’d be making a grave mistake by doing that.

There are procedures and instructions to follow to ensure everything turns out fine at the end of the day, and they’re discussed below.

The first advice for paring up a fridge and a range is to make sure that you’re providing a decent spacing between them. Refrigerators are never advised to be kept in tight confinements because such spaces work against their eloquent mode of breathing: heat dissipation. A fridge is expected to be in a well-ventilated space having decent head spaces at the top, back and sides. So take note!

When it comes to spacing, whatever that provides it is completely fine so long it’s not a metal. That’s because it conducts heat which makes the provision completely useless. The ideal item for providing shield would be a screen (heat reflector) or any material that acts to prevents heat transfer. Examples include: air, wall, cabinet etc.

For the other forms of spacing, make sure that they also fulfill the 30 or 5 cm spacing requirement.

When you’re using a spacing between the two appliances, an insulating material slapped on every side or all over the fridge usually isn’t a necessity. But it should be done when the wallet permits, you know, for extra caution.

When the two appliances aren’t separated by a physical material however, due to space restriction, it’s best to provide an insulating material like this Double Bubble Reflective Foil insulation to reflect any heat escaping from the oven and making it’s way towards the fridge. Just make sure the two appliances aren’t placed so close to each other i.e (less than 2 cm in distance).

If your kitchen doesn’t already have one, install it. It serves to control heat dissipation in the kitchen by sucking out hot air which reduces the aggregate amount of heat radiating towards the fridge.

When installing a fridge right next to an oven, make sure to pay attention to convenience. You don’t want to realign the position of the pots every time you try to make pasta or cook veggies because the side of the refrigerator has become a permanent obstacle. Additionally, you want to pay attention to the direction of the handles of both the fridge and oven door.

Where is the best place to keep a refrigerator (even inside the kitchen)?

Your refrigerator should be kept in a cool area around the house, and if in the kitchen, the coolest spot.

As a general rule of thumb, a refrigerator, if it must be kept in the kitchen, should be in the coolest part of it.

This means you should ditch areas that are opposite the windows or close to them which can bath the fridge with harsh amount of sunlight every day, and also to keep the fridge away from heat sources such as ovens.

If your kitchen is designed using the one kitchen wall layout, you can always place the refrigerator at one end of the wall and position the oven at the other end or in the middle of the layout for convenience. For a gallery kitchen design, keep the two electronics adjacent to one another.

In an L shaped kitchen, the fridge should be at one end or tip of the L shape and the oven should be placed at the middle of the adjacent leg of the L shape. Finally, if you have an island type kitchen, then there must be more than enough space to keep the oven away from the fridge. So pay careful attention to it.

Why it might be dangerous to keep fridge next to oven

Every quality electronic snapped up from local stores nowadays has an owner’s manual slid into the bottom of the cardboard packaging.

And these aren’t there for you to just pick up, skim through and toss under the bed until forever comes knocking. Instead, they are there to guide you on the best practices for using the appliance which will guarantee its proper functionality for the stipulated life span.

When a refrigerator’s manual, for example the one from metos kitchen intelligence, strongly condemns the installation of a fridge right next to an oven, it could be because the lining of insulation placed between the interior and exterior of the fridge can no longer be relied upon for the purpose of insulation the very moment surrounding temperatures begin to exceed ambient.

So placing the fridge right next to an oven which is consistently put to use can make its inside hotter than normal, which can cause the compressor to run a bit more frequently and hard, which in turn births harsh consequences such as increased energy consumption and reduced longevity of the appliance.

The consequence of increased power consumption is usually felt the most with old fridges rather than modern ones, since they weren’t built with the “efficiency factor” of new technology fridges.

Another reason why a manufacturer might condemn the practice of placing a fridge right next to an oven might be because the design parameters, components, units, and built-in functionalities of the fridge were never made to operate at temperatures higher than room temperature in the first place.

So subjecting them to this temperatures might impart on their effectiveness and efficiency with continued usage, which can cause the device to break down sooner than expected.

Of course, if one manages to use their domestic oven less frequently than normal, they can always manage to extend the already deteriorating lifespan of the fridge a bit more, but that still wouldn’t lower the possibility of a break down sooner than expected.

When a fridge is slapped with the mid or low quality badge (we normally do that, manufacturers never seem to do so), you know exactly what it means don’t you? So when such kind of fridges explicitly state on their manuals that you shouldn’t place an oven near them, don’t be stubborn and go against the advice, just follow the instruction diligently.

The manufacturer knows exactly what and which process they employed for the fabrication of the component and units that make up the fridge, the reliability of each unit or component, and the degree of resilience each component or unit has under the application of stress. You don’t!

All these aside, it could be that the manufacturer is only after the aesthetics and visible health of the fridge. Constant splatter, jumping sizzles from vexing oil, flying solutions of oven cleaners, and grime and gunk accumulation associated with oven usage can be transferred across to the refrigerator surface which can cause it’s fine finish to quickly deteriorate.

Can you place a fridge next to a stove?

It’s never ideal to place a fridge next to a stove as the two serve opposite functions. But most of the time, a fridge next to an stove having at least 10 cm distance between them (effected using a wall or shelve) is a decent configuration that can work.

Can you put microwave on top of a fridge?

Microwaves typically don’t get as hot as conventional ovens, thus they may be placed close to or even on top of fridge if the need arises. When placing a microwave on top of a fridge, the height of the fridge should be considered as you never want to upend really hot food over yourself while trying to retrieve food from the microwave.

How far should a fridge be from an oven or stove?

A fridge should be given at least 30 cm distance from a gas oven and 5 cm distance from an electric oven. This is necessary to prevent excessive heat radiation from the oven to the fridge, or a rise in the internal temperature of the fridge due to sudden rise in the temperature of the surrounding air cause by heat dissipation from both oven and fridge.

Where to put fridge in small kitchen?

Place fridge near the oven to utilize available spaces, but make sure to observe all the necessary steps when appropriate and the wallet permits.

A fridge does require proper ventilation and spacing on all sides including the top for proper heat dissipation. When confined in a tight area without proper spacing, a refrigerator may begin to work extra hard which can have serious consequences on its performance in the long run.

A fridge can be installed near a domestic oven in the kitchen when lack of available space around the house is the issue. But first, one needs to make sure they aren’t going against the manufacturer’s warning which is typically issued out in the manual. One should also check their oven manual to confirm that it’s safe to pair up with a fridge.

When such is the case, the fridge can be installed with a protective insulation on the side close to the oven with a minimum distance of 30 cm for gas ovens and 5 cm for electric ovens. The insulation can be provided by a cabinet, drawer, screen or some sort of insulate material. 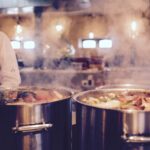 Can you put hot food in the fridge? How long should soup cool before refrigerating?